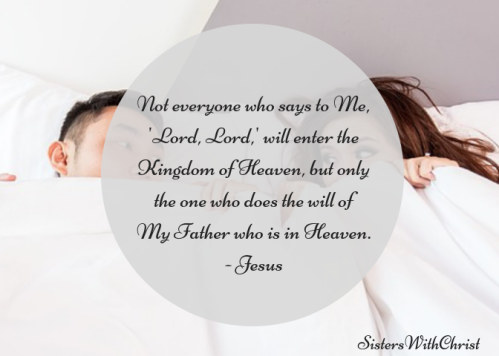 A short time ago, I found myself engaged in conversation with someone I’ve known since my childhood years (he’s a little younger). The conversation began lightly, remembering things from the past, but quickly shifted when I asked, “So when are you and your girlfriend getting married?”

One wouldn’t think that a professing Christian would be so put off, almost disgusted, by such a question (especially since they’re living together, doing married folk things, and are parents to a young child), but, he was. “I ain’t marrying her,” he said. “People don’t do that anymore.”

Put off a little myself by that answer, I explained that sex is to be done within marriage, and if we profess to follow God, it’s either marriage or celibacy (which rules out living together).

“Man, this is the new generation,” he said. “We’re the Millennials. That’s old school, the Old Covenant.”

I (who would fall into the ‘Millennial’ category myself) was in disbelief, to say the least. However, I explained that sex outside of marriage was indeed a sin under the Old Covenant, and it still is under the New. God does not change.

Nevertheless (though he’s sought out my advise on other occasions, which came from the Word), he refused to hear it, using the nobody’s perfect logic and inferring that I was being negative (along with giving points of why he won’t jump into marriage, even though he loves his girlfriend).

“Well,” I went on, “if you were to die today or tomorrow [or thereafter unrepentant], you’d be in trouble.”

“I won’t be in trouble,” he said confidently, basing his certainty on his “relationship” with God. “Me and God talk every day.”

That conversation (which didn’t end there, as I continued to discuss hell) astonished me, to be honest. Although I know that he and his girlfriend are professing Christians living in sin, which was the point of my bringing up marriage, to hear the notion that the young and “Millennials” somehow get a pass to sin against God, or so they think, blew my mind.

I don’t know if any of you who read/visit/follow this blog consider yourselves Millennials who can live apart from the words of God and still be in His good graces, but if so, I’ve come to blow that twisted notion clean out of the water.

In 1 Peter 1, verse 16, God says through Peter, to the one who professes to follow Him, “You shall be holy, for I am holy.” The King James Dictionary defines holiness as purity of heart or dispositions; sanctified affections; piety [godliness]; moral goodness. Although it is true that we won’t reach perfection in these things in this life, the believer’s heart posture should be to obey the commands of God (John 14:15, 21-24), trusting Him to help us in our weaknesses.

Sex may be your weakness; however, giving in to that desire outside of marriage is wrong, immoral, and sin against God. And for the next few minutes, I want to make that plain through the words given by God Himself (specifically using the New Testament, to prove a point to the ‘new’ generation [those born from 1997 onward] and Millennials [those born between 1981 and 1996]).

“Do not be deceived,” God tells us (through Paul) in 1 Corinthians 6:9-10, “neither the sexually immoral, nor idolaters, nor adulterers, nor men who practice homosexuality, nor thieves, nor the greedy, nor drunkards, nor revilers, nor swindlers will inherit the Kingdom of God.” He goes on, in verse 18, to tell us to “flee [run fast] from sexual immorality.”

In 1 Corinthians 7, Paul, led by the Spirit of God, tells us, “It is good for a man not to have sexual relations with a woman. But because of the temptation to sexual immorality, each man should have his own wife, and each woman her own husband” (verses 1-2). Jumping down to verses 8-9, he says: “To the unmarried and the widows I say that it is good for them to remain single, as I am. But if they cannot exercise self-control, they should marry. For it is better to marry than to burn with passion [lust].”

Next, in Galatians 6:7-8, we read, “Do not be deceived [there’s that warning again]: God is not mocked, for whatever one sows, that will he also reap. For the one who sows to his own flesh will from the flesh reap corruption, but the one who sows to the Spirit will from the Spirit reap eternal life.” Nothing good comes from sowing to the flesh (cf. also Romans 6:23).

Lastly, I want to look at Hebrews 13:4, where God says, “Let marriage be held in honor among all, and let the marriage bed be undefiled, for God will judge the sexually immoral and adulterous.” (Emphasis added to all Scriptures.)

Many people, especially those of the new generation and Millennial sects, have a habit of throwing around the phrase only God can judge me. Well, we see at the ending of our last verse (as well as others in the Bible) that He will. He will judge us all according to the fruit of our lives. Therefore, if sin is all you’ve sown in this life, the judgment that God will pronounce upon you won’t be favorable, no matter how many professions of following Him have been made.

Friends, we don’t get to pick and choose what’s “reasonable” and what’s not when it comes to following God. It’s either we take His words, given to us in the Bible, seriously (all of them), or we hang up our professions. Do I understand how the flesh works and that many days it wants to be hostile toward the commands of God? Yes, I do. But, I also know that through the Holy Spirit, who lives within true believers, we are able to carry out what’s been commanded of us.

On that note, if you came here under the impression that you could serve God and your flesh with no condemnation, it is my prayer that your mind has been renewed. As God tells us in Matthew 6:24, no one can serve two masters. We will either let the flesh win out, or the commands of God. Which we choose is of utmost importance, as it will affect the rest of this life, and the one in the next.